Duvall Farmers Market was founded in 2006, and in 2020 moved to the quiet grassy park at Taylor Landing on the north side of town. Open every Thursday 3-7PM from the first week in may until mid October, it features local and regional small farmers, producers, artisans and crafts persons.

Taylor Landing was the original site of Cherry Valley Village when the river was used primarily to transport logs. Due to excessive flooding each spring the town was moved to a higher elevation, where old town Duvall is currently located. It was renamed Duvall after Frank Duvall, a local character.

Duvall Farmers Market was located on Brown Avenue in front of Duvall Hardware from 2010 until 2019. Prior to that it had locations on Stella St., Third Ave, and at Depot Park. It was first organized in 2006 by former Duvall resident Laurie Gilbertson. In 2011 it was re-organized as a non-profit with a board, which is how it is operated today. The market has been an active member of Washington Farmers Market Association since its inception. The market board is grateful for continued support from the community, city, vendors and patrons. New vendors, volunteers, musicians and sponsors are always welcome.

Hours
Thursdays 3:00PM-7:00PM
May thru mid-October 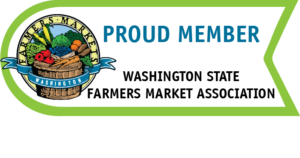